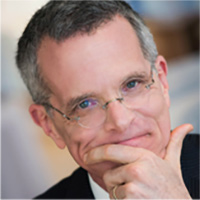 Don's 40-year career as an entrepreneur, executive, investment manager and commentator has been built around his passion for the application of technology and innovation to the challenge of investing.

Prior to founding Trend Macrolytics, Don was vice chairman and co-chief investment officer of Barclays Global Investors. After a decade building Wells Fargo Investment Advisors into the world's largest and most innovative investment manager -- where indexing, sector ETFs, tactical asset allocation and quant-active investing were invented and popularized -- Don was a member of the three-man management team that sold the firm to Barclays Bank PLC in 1995. The firm was acquired by Blackrock in 2009.

At Barclays, Don invented and patented target-date mutual funds, which have since become a standard for retirement investment. He pioneered sector ETF's, creating the fund family now known as i-Shares. After Barclays, Don was CEO and co-founder of MetaMarkets.com, and manager of the pathbreaking OpenFund -- the world's first "interactive mutual fund," that showed all its holdings and trading activity in real-time on the Internet.

Don was the inventor of the POSIT ECN, and founder of Investment Technology Group at Jefferies & Company. He has been a hedge fund manager and an options market maker on the Chicago Board Options Exchange, the Pacific Stock Exchange, and the New York Stock Exchange.

Don has been an economic advisor to two presidential candidates including the late John McCain, and has briefed the President in the White House. He contributes frequently to the op-ed page of the Wall Street Journal, and appears regularly on Fox Business.

He is the author of I am John Galt and Index Options and Futures: The Complete Guide, and editor of Portfolio Insurance: The Guide to Dynamic Hedging, all published by Wiley.

His articles and commentaries have been published in the Washington Post, Investors Business Daily, Reason, the Harvard Business Review, National Review, Pensions & Investments, Townhall, the American Spectator, the San Jose Mercury News and the Detroit News. He was formerly a columnist for TheStreet.com and Business 2.0 (now Fast Company), and SmartMoney.com.